Monster Truck Releases Music Video for ‘Get My Things and Go’ 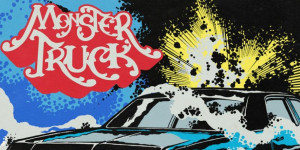 Monster Truck has released the music video for their latest single "Get My Things and Go" via BMG. The music video is directed and edited by Dave Lawrence, best known as the creator and star of FUBAR, and produced by Immanuela Lawrence. It brings the track to life, featuring children acting as adults living in a world solely populated by kids.

Watch below!
"We loved the idea of a 'Kid World'. So we tried to follow the narrative of the song in a world solely populated by kids acting and dressing like adults.

In 'Kid World', no adults exist except on "MonsterTube" which is populated with fun YouTube style videos kids love to watch made by the band. They play immature adults making a ton of easy money off "MonsterTube" to contrast with the working class struggles in 'Kid World'," said the music video director, Dave Lawrence. I really love how it all came together."

"Working with Dave Lawrence has long been a dream of ours.

He's so effortlessly funny and creative, it's always been inspiring to us. Dave brings a really amazing feeling of almost innocence to his projects even though the subject matter may be shot-gunning beers and smashing s," said Jon Harvey, bassist and lead singer of Monster Truck. "We'd wanted to do a video starring kids, but playing adults, since our second record in 2016, and the whimsical, storybook nature of the lyrics to 'Get My Things And Go' were the perfect match for this bizarro world concept. The end result speaks for itself."

In 2011, the Canadian rockers released The Brown EP, featuring tracks that soon became staples on Canadian rock radio and set the stage for their debut full-length album Furiosity.

After its release, Furiosity rose to success, reaching #13 on the Canadian charts and leading to a JUNO Award for Breakthrough Group of the Year, and a nomination for JUNO Rock Album of the Year.

Touring in support of Furiosity, the band played high-profile gigs such as UK's Download Festival, landed supporting slots on the European tours of bands like Vista Chino, embarked on their first headlining tour of the continent, and headed across North America with the likes of Slash and Alice in Chains. The band continued to deliver new music in 2016 with the release of Sittin' Heavy and hit the road again with over 150 shows over the next 18 months on their own and in arenas supporting Nickelback, Billy Talent, and Deep Purple on their final European tour. They later released True Rockers in 2018, which further cemented their reputation as a hard-rocking band respected by their peers and progenitors.

Monster Truck's profile has grown substantially in North America, with the band landing headlining slots at Rock on the Range and Shiprocked in the US, and securing song placements for tracks "Sweet Mountain River," "Seven Seas Blues," and "Old Train," which appeared in Ubisoft's game, Rocksmith 2014, EA Sports' NHL 13 and the hit TV series, Orphan Black.

Additionally, "Righteous Smoke" was featured on EA's NHL 17, and "The Enforcer" became the 'goal song' for The Toronto Maple Leafs.

Over time, Monster Truck has remained true to their core sound while continuously building on that foundation and stretching out, lyrically and sonically.

Their ability to do so successfully and satisfyingly has only deepened the impact of their records and grown their audience globally as they gear up to release more new music this year.