One of the very first things Michael A. Manuel did when I met him at the fifth annual Gear Jammer Magazine Truck Show, ongoing in New Hampshire, was call across the Monadnock Speedway to an employee driver and ask how many miles his 2019 Peterbilt 389 had on it.  As it would turn out, 329,000 miles, in fact. "They work," Manuel said of his fleet of some 40-odd Peterbilts, the majority of which are newer, decked out, and with long hoods.

Manuel himself stood polishing the bright hubs of a 2015 389 that had been custom-cut to show puzzle pieces, reflecting the character of many of the other hundreds of custom touches around the impressive rig. The puzzle-piece theme, seen virtually everywhere on the truck either engraved, etched, or even welded on like tiles (from the back of the cab to the fifth wheel), represents the truck's purpose: raising awareness and support for people with autism. The rig, Manuel's 2015 flagship, dubbed "One of Many," was hooked to a new-looking conestoga flatbed that spelled out the cause, as well as the name of his daughter, Kara, herself one of more than 5 million U.S. adults living with autism.

Based in Front Royal, Virginia, Manuel prides himself on long-running relationships with employee drivers and customers, probably as much as he does his trucks. 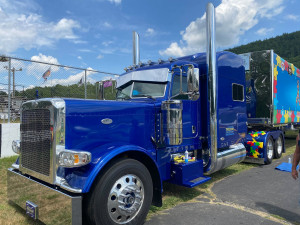 You may not be able to see it, but there are puzzle pieces "ghosted" onto the visor, etched into the bumper, and the Peterbilt emblem itself is replaced with one that promotes autism awareness.
"I'm a Peterbilt guy and we have 41 of them," he said. "Bricks, shingles, lumber, that's basically what we haul.

It's busy. If anybody wants to work, if you want to haul building materials, there's work." (Manuel's wife and business partner Pat, who was also at the Gear Jammer show, contested Manuel's all-Pete claim -- there may be a Kenworth or two in the fleet, she said, but her husband doesn't claim them.)

The flatbed segment has held up robustly, at least in comparison to the recent-months spot rate downturns in dry van and reefer, and with the size of his operation, Manuel has insulated himself from the worst of fuel price volatility and sticker shock at the pump. "Right now the rates are where they should have been 20 years ago on the flatbed side," Manuel said. "This is 42 years for me" in trucking, "and the last two years this has been the best money we've ever made. Fuel doesn't bother us, we're based off the national average every Tuesday."

Manuel's is a family business, in part, with his son running dispatch and his wife running the back office. Manuel himself runs the shop but still gets out driving "One of Many," saying he "loves to see his customers." With his recent profits, he's not having any trouble finding real professional drivers -- as opposed to bodies to fill the seats, as they say.  He does have one new Pete in the yard, but didn't seem worried about finding a driver. "I've had drivers with me for 30 years," he said. "Anybody can drive a Freightliner, but when you put a £210,000 tractor and a £60,000 trailer and you got some of the best equipment out there, you can pick and choose who drives your truck.

Everybody wants to drive a big fancy truck." Standing between three of his trucks at the show, it seemed Manuel was actually being modest. A look at his website shows an extensive photo gallery of custom Peterbilts hauling flatbed, and makes clear a guarantee that all his drivers will be home on the weekend, that they get three weeks paid vacation after two years, and that they get medical, dental, and vision benefits after 60 days.

His business bases driver compensation on a percentage of the load -- top company drivers are paid 30%. He said many clear £100,000 a year in income. At this point, the secret to Manuel's success seems simple: Big cushy trucks, solid yet reliable hours and benefits, and fat paychecks. "You don't have to recruit when you've got good equipment and you treat your drivers right," he said. "You've got to give to receive." 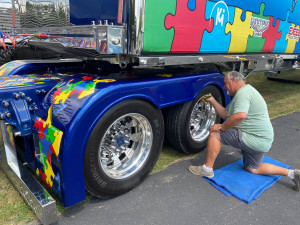 Michael A. Manuel polishes up the rims; note the puzzle pieces cut into them.Alex Lockie for Overdrive 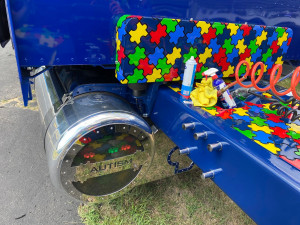 Note the puzzle pieces floating in the aquarium-like addition to the back of the tank. Also, the puzzle pieces shown here between the frame were each individually cut and welded down to the deckplate like tiles before being individually taped and sprayed. The level of textures, not just flat finishes, sets the truck apart.Alex Lockie for Overdrive

But when I spoke to his company drivers on hand at the show, another type of benefit became clear. The operators, who Manuel all knew by name of course and who were quick to make some gentle, collegiate jokes at his expense, spoke to what it's like to actually operate show-quality trucks on the job day-in, day-out. 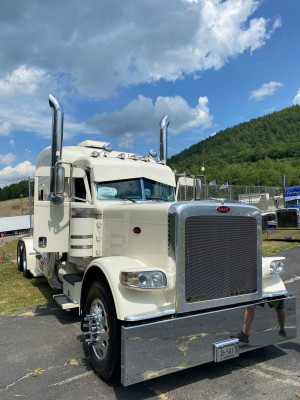 Another of Manuel's trucks, a 2019 389 glider.Alex Lockie for Overdrive "She likes it rough," said the operator of the off-white '19 389. "When I had to get a new truck with them, they asked me if I wanted to be on paper logs or ELD, and I said paper." The 2019 he hauls in now is a glider with an ELD-exempt engine.

A tradeoff is he gets a modest 5.5 miles per gallon even when he "babies" it, yet mostly he "drives the speed limit," he said. The entire fleet is governed at 75. The operator spoke of rates so strong last year that he would take a load of shingles from North Carolina to Orlando, Florida, and simply deadhead back to pick up another load. "I'm in the left lane, I'm that guy," he said.  For him, the percentage pay model provided all the incentive he needed to push the new Pete to the edge of maximum productivity.

The building materials gig normally saw his trailer loaded and unloaded pretty quickly. With the 2020-changed split-sleeper provision in the hours of service rule, he'd been able to pull off some pretty sharp turnarounds, he added.  And, clearly, this was no garden-variety company driver.

The operator took real pride in polishing out the bumper on the rig as we spoke.