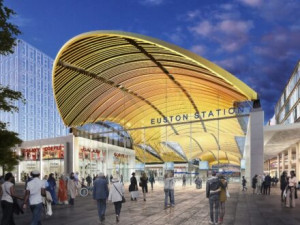 More than GBP100m was spent redesigning HS2's new station at Euston, it has emerged. The station, which will be HS2's main London hub once it has been completed, was redesigned to accommodate 10 platforms rather than 11, following recommendations by the Department for Transport (DfT) in September 2021. At the time, HS2's independent design panel said the new plans were a "means of maximising public benefits, including the regeneration of the area, from the public's investment".

But HS2 incurred costs of GBP105.6m due to the redesign job, according to the group's annual accounts, which were published this week. "There is a non-cash impairment charge of GBP105.6m, which relates to the design change for Euston station that was formally instructed by the DfT on 3 September 2021, based on the advice from HS2 Ltd, arising from [a] study," the accounts state. In the document, HS2 chief executive Mark Thurston said the change of design would "minimis[e] disruption to local communities".

"We are working with Network Rail, with support from The Euston Partnership, to develop a cost-effective design for Euston that provides integration between the HS2 station and the redevelopment of the Network Rail station, while delivering value for money for the taxpayer," he added. Problems at the station, along with wider delays to enabling works, have contributed to costs rising by GBP800m, which will be covered by a GBP4.3bn contingency fund. A spokesperson for the DfT said the construction job at Euston was "complex" because it is situated in a densely populated residential area and is next to a busy railway.

"The updated design means the station can now be built in a single stage, reducing the length of construction and disruption, delivering opportunities for greater over-site development, as well as reducing cost," they added. As reported in May, reducing the size of HS2's Euston hub does mean it is no longer possible to remove spoil by rail. It will instead be removed by road, which diverts from a promise previously made by HS2 to local residents.

The redevelopment of Euston station has been beset by problems. Lengthy indecision over the construction project has led to Old Oak Common becoming the initial London terminus while work at the Camden station catches up. Old Oak Common, along with the rest of the stations in phase one, is set to be completed by 2028.

Euston has an opening date range of 2031-36. Construction News revealed last month that HS2 had shifted its focus at Euston from from developing a "world-class" rail station to one that is "highly functional and affordable". Members of the Euston Partnership Board, which includes the local council and Network Rail, as well as HS2, backed the approach at a meeting in 2021.

When approached for comment, HS2 referred CN to the comments made by the DfT spokesperson.