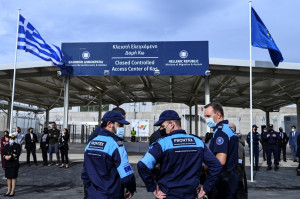 It follows repeated allegations by aid groups that Frontex was turning a blind eye to Greek human rights violations at sea. The report said that Frontex, under the administration of Frenchman Leggeri, who quit in April under pressure from the European Parliament and rights groups, covered up pushbacks by Greece, deliberately lied to the EU parliament, and covered up the fact that European taxpayers' money was used to finance the pushbacks. "Instead of preventing the pushbacks, Leggeri and his people covered them up.

They lied to the EU Parliament and concealed the fact that the agency even supported some pushbacks with European taxpayers' money," Spiegel wrote. The report exposed that Frontex officers did not report the actions in an attempt to avoid provoking reactions from Greek officials even when they became aware or witnessed illegal pushbacks. "Incidents were not reported through official channels as Frontex-deployed staff feared retaliation from Greek authorities," it said.

The magazine said the report is "too explosive" so a very limited number of EU officials, apart from European Commissioner for Home Affairs Ylva Johansson, who was always very critical about Leggeri and Greece's pushback policy, have read the investigation. The OLAF review found that at least six pushback incidents involved Greek coast guard ships that had been co-financed by Frontex, the magazine said. In one incident in August 2020, Frontex Surveillance Aircraft filmed the Greek coast guard towing a dinghy with around 30 migrants on board toward Turkish waters - when they should have been taken to Greece.

Instead of confronting Greek authorities, Frontex stopped patrolling the Aegean by air, saying the planes were needed elsewhere, Spiegel wrote. A hand-written note found later by OLAF investigators said that Frontex management withdrew the aircraft "so as not to become a witness" to Greece's illegal actions. The Greek government has consistently denied the allegations of pushbacks.

The OLAF investigation paints a damning picture of Leggeri's leadership, Spiegel said, adding that the report's revelations played a role in his resignation last April. Responding to the OLAF report leak, a European Commission spokesperson said "a set of measures" had already been introduced "to address the governance issue of Frontex," which has been headed by interim executive director Aija Kalnaja since the start of July. "In terms of our work with the Greek authorities, there is progress also on the ground," Anitta Hipper told reporters, pointing to a new legislative proposal "to ensure that there is a robust monitoring system" for arriving migrants.

Former boss Leggeri's seven years as Frontex chief, marked by repeated political scares over migrant arrivals in Europe, coincided with a major increase in resources for the agency. Frontex is set to grow to 10,000 staff watching the EU's external borders by 2027. Moreover, European Commission Vice President Margaritis Schinas has acted more for Greece than as the bloc's senior official, according to the magazine.

"Schinas is a party friend of Greek Prime Minister Kyriakos Mitsotakis," it said, adding that he using his influence and developments "as an insider." The magazine highlighted that Schinas recently claimed that there was no tangible evidence that the Greek coast guard was carrying out pushbacks.

Human rights advocates and leading media outlets have frequently reported illegal pushbacks and other rights breaches by Greek authorities that have violated EU and international law. Greece intercepts boats transporting migrants and asylum-seekers heading to its eastern islands from the nearby coast of Turkey.

Human rights organizations allege the country carries out summary deportations, known as pushbacks, which the Greek government denies. In addition to seaborne pushbacks, Greek border forces are also accused of apprehending and forcibly expelling migrants who cross into the country by land. In February, at least 19 migrants were found frozen to death near the Turkish-Greek border after being pushed back to Turkey by Greece.

Officials in Ankara have criticized Athens for the inhumane and degrading treatment of irregular migrants, saying those who were found dead had been stripped of their clothes and shoes by the Greek border guards. Greece has denied any involvement. Meanwhile, Germany's top diplomat visited refugees at a camp in Greece on Thursday after stressing that European Union countries should do more to safeguard people seeking refuge from war and hardship.

German Foreign Minister Annalena Baerbock visited a Holocaust memorial in Athens before sitting down with refugees at a camp west of the city. She used the visit to promote what she called "a common European sea rescue policy" and to oppose summary deportations of asylum-seekers and migrants. "Our European values also apply at the European external border.

If we don't defend them there, they will perish," Baerbock said in an interview with the Athens daily newspaper Ta Nea published Thursday. The EU border protection agency Frontex has reported a sharp rise in unauthorized border crossings following the relaxing of travel restrictions related to the coronavirus pandemic. The agency said illegal crossings were up by 84% in the first six months of the year compared to the same period in 2021.

The largest increases were recorded in the Eastern Mediterranean, up 125%, and the Western Balkans, where illegal crossings rose 191%. Police in North Macedonia said 88 migrants from Syria, Pakistan, India and Yemen were found crammed into a truck near the southern border town of Gevgelija. The 35-year-old driver was arrested.

Baerbock is a former leader of a Green party that is a junior partner in Germany's center-left coalition government.