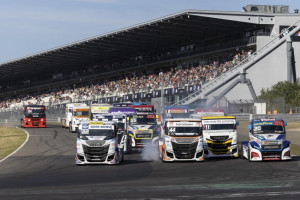 The Hungarian ace kick-started the weekend in his usual fashion, taking his seventh pole of the season from as many sessions. He then converted the pole to a victory in Race 1, but that was his only victory of the weekend. He, however, still managed a couple of fourth places and a runner-up spot in Race 4.

Race 2 produced one of the feel-good stories of the weekend, with Lukas Hahn, son of the series' most decorated racer, taking his maiden victory. The third-generation truck racer had a flawless race starting from the pole position of the semi-reversed grid heat and handled the pressure of leading the race expertly, taking a commanding lights-to-flag victory in what was the first win of the season for Team Hahn Racing. Came Sunday, and Hahn senior started the day off on a high, by taking his first pole position of the year and putting an end to Kiss' 2022 qualifying supremacy.

He then went on to convert the pole into his first victory of the year. In the final encounter of the weekend, Jamie Anderson took his second victory of the year. The Brit experienced a day of mixed fortunes - his Sunday started with a power steering issue that prevented him from taking part in qualifying.

He then made comeback to eight in Race 3 that put him on pole for the final encounter of the day, where he held the opposition at bay to the checkered flag first. Kiss wrapped up a total of 46 points in Germany. Points-wise, despite this being his lowest tally of the season to date, he still came out on top, with second-best Hahn accumulating 43 points.

At halfway point of the season, Kiss looks in good shape to secure his fourth series crown, leading the standings with 206 points to his name. Second-placed Hahn is 48 points down on the leader but only six points ahead of his compatriot Sascha Lenz. Goodyear FIA ETRC is set to resume in September with the title-deciding phase of the series comprising rounds at Autodrom Most, Zolder, Le Mans, and Jarama held across five weeks. 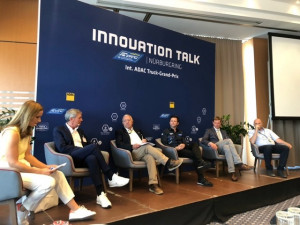