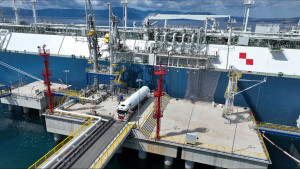 State-owned LNG Croatia, the operator of the FSRU-based Krk import facility, said it has completed the 100th LNG reloading operation directly from the vessel to a truck. The milestone ship-to-truck operation took place on Monday, according to a statement by LNG Croatia. To remind, the firm started offering these services in April this year.

On a monthly basis, terminal users can book about 40 slots to fill their trucks with LNG. "This non-standard service has been available to terminal users since mid-April 2022, and all available slots have been booked so far, which indicates the market demand for this operation," LNG Croatia said. LNG Croatia added it expects about 40 operations per month to take place in the coming period as well.

The firm has received 35 LNG cargoes at the Krk import facility since the launch of operations in January last year. Croatia's FSRU mostly gets supplies from the US. The terminal boosted its capacity earlier this year from 2.6 billion cubic meters of gas to 2.9 bcm per year without new investment.

Croatia is also planning to further increase the capacity of its FSRU-based LNG import terminal, as European countries look to slash reliance on Russian gas.

The country plans to even double the regasification capacity of the terminal to some 6.1 bcm.