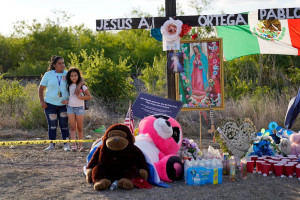 On 27 June, authorities discovered an abandoned tractor-trailer outside of San Antonio, Texas, filled with dead people smuggled from Mexico and Central America. Fifty-three migrants would ultimately die in the tragedy. It was the worst such incident in US history, and a sign of how things have changed at the US border in recent years: cross-border human smuggling has gone from a fragmented business of small-time criminals to a £13bn-a-year enterprise controlled by organised crime, according to the Department of Homeland Security.

The San Antonio incident bore all the signs of the new smuggling regime. The migrants inside the truck hailed from Mexico, Honduras, Guatemala and El Salvador, according to their respective governments. Many paid between £3,000 and £8,500 to Cartel del Noreste, an organised crime group, for transportation from the cities of Camargo and Nuevo Laredo in Mexico, to a drop-off point in San Antonio, VICE News reports, citing two people directly familiar with the deal.

The smugglers promised the migrants and their family a "three-month warranty" and "three months of attempts," according to WhatsApp chat records. Authorities believe the group was then put in a truck with a "cloned" identification number matching a real trucking business, held at a US-based safe house, and taken through a US Border Patrol checkpoint in Laredo, Texas, without incident, before the group was left in San Antonio. The smuggling business has exploded in recent years, as numerous structural factors ranging from poverty to climate change to gang violence push migrants northward, even as the US has increasingly tightened access to its immigration system, especially during the pandemic.

According to government figures, more than 5,046 people were arrested for smuggling last year, nearly double the total in 2014. The smuggling business now makes £13bn a year, up from £500m in 2018, as drug cartels have taken over control of smuggling from independent "coyotes" who used to guide groups across the border. The smuggling business has grown especially lucrative during the pandemic thanks to policies like the Title 42 public health directive, a Trump-era order authorising border officials to turn away most border crossers immediately under the guise of the pandemic.

The Biden administration has tried to end the policy, which critics say denies migrants their legally protected asylum-seeking rights, but the White House has been stymied by rulings in federal courts. As a result, border-crossers often make repeated attempts to cross into the US, creating even more demand for smugglers. Until these motivating factors go away, migrants will keep coming to the US, according to immigration experts.

"There's never going to be a point of militarization that the US can get the border to that would completely stop all these flows," immigration Jessica Bolter of the Migration Policy Institute, told The Independent. "The environmental and security push factors that are driving people to leave, as well as economic push factors, especially during and in the wake of the pandemic -- there's always going to be reasons to migrate." This has led groups like Mexico's Gulf Cartel to step in, bringing ruthless efficiency to a business already dangerous for the migrants involved. Using the resources of the cartels, smugglers now use ID bracelets, secret warehouses, and WhatsApp to move people and hold migrants for ransom across vast distances.

"They are organizing the merchandise in ways you could never imagine five or 10 years ago," Guadalupe Correa-Cabrera, an expert on smuggling at George Mason University, told The New York Times. Teofilo Valencia of Mexico told the Associated Press he took out a loan against his family home to pay £10,000 to smugglers to bring his two teen sons into the US, before they died in the San Antonio tragedy. Even with the rise of big business human smuggling, its no guarantee of safe passage for migrants seeking a better life in America.

If family members are unable to fully pay smugglers, migrants can be held in stash houses and subject to torture and sexual violence. Those who do get transported successfully often face the same kind of harrowing conditions as the dead migrants in San Antonio. In March, border agents near El Paso found 34 migrants hiding in two cargo containers without ventilation.

The Biden administration has slowly attempted to roll back some of the Trump administration's hard-line immigration policies, with a major victory coming in June when the Supreme Court allowed the White House to rescind the so-called "Remain in Mexico" policy for asylum seekers.