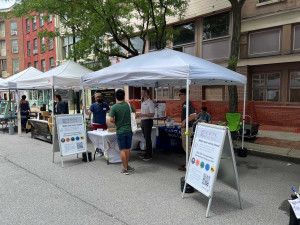 TROY - Information about nearly £400 million for the Capital Region's roads, bridges and buses was being served Saturday at the Troy Waterfront Farmers Market among the usual offering of farm fresh produce and takeout food from local restaurants. Capital District Transportation Committee staff and Capital District Transportation Authority representatives were enticing strolling market goers to stop and hear what's planned for the next five years will be at the Troy Waterfront Farmers Market, seeking public comment on spending about £400 million in federal transportation funds over the next five years. The booth at the farmers market was part of the two transportation agencies' public outreach to get comments about the five-year, 2022-2027, Transportation Improvement Plan.

"It's a lot to take in," said Ben Gradess of Troy, who stopped to learn more about the programs and the spending to do the work proposed. Gradess explained that as a taxpayer he wants to know where tax dollars at all levels - federal, state and local - are going.  When he heard that there would be information available at the market, he made time to hear what the transportation planners had to say.

Stephen Maples, a CDTC transportation planner, said people are interested to hear what impacts the plans will have on pedestrians, bicyclists and vehicle transportation. Maples and Andrew Tracy, a CDTC senior transportation engineer, handed out information broken down by the CDTC's four county area, Albany, Rensselaer, Saratoga (except for the town of Moreau and village of South Glens Falls), and Schenectady counties.  They also urge people to visits the CDTC's TIP Feedback Portal to learn more and to comment.

Andris Blumbergs and Jaco Landis, planners for M.J. Engineering and Land Surveying of Clifton Park, were explaining CDTA's Bus Lane Feasibility Study and soliciting comments, which can be made online at www.buslanestudy.com/survey.

Projects include work at the Congress Street Bridge development, work on Route 7 in Brunswick, bridge replacements in Saratoga County, work on I-890 in Schenectady and redoing Central Avenue in Albany. There will be additional public information sessions from: