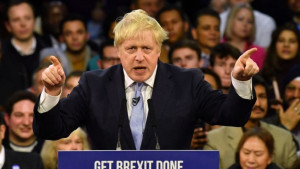 Boris Johnson became prime minister on the promise that Brexit would bring prosperity and pride. Did it? Here's everything you need to know:

How did Brexit come about?

The United Kingdom narrowly voted to leave the European Union in a 2016 referendum after a bitter campaign rife with misinformation and racism.

The main cheerleader for the Leave camp was Boris Johnson, who claimed loudly, repeatedly, and falsely that Britain was sending 350 million pounds to the EU every week. Brexit, he said, would give Britons their money back -- as well as let them set their own immigration policy, so they wouldn't have to accept so many asylum seekers or EU migrants. After negotiations with the EU over the terms of the exit dragged on for years, Johnson resoundingly won the prime ministership in 2019 on the pledge to "get Brexit done." Now he is leaving 10 Downing Street in a cloud of lies and scandal, and while Brexit is done, few are happy with the result.

Britain's GDP per capita has grown just 3.8 percent since the referendum, while the EU's has leaped 8.5 percent. Companies are struggling to recruit skilled workers, and trade with Europe has slumped. "If you can't ship your goods into the biggest market on your doorstep," said Gyr King, chief executive of King & McGaw, a print company, "you have got to be shooting yourself in the foot."

What was Brexit supposed to bring?

In laying out his case for Brexit in The Telegraph ahead of the referendum, Johnson focused mostly on sovereignty issues, saying that up to 60 percent of new British legislation was being written in Brussels and that Britons must take back their country. He was long on stirring rhetoric and short on economic specifics.

Other prominent Brexit supporters, such as then-Chancellor of the Exchequer Philip Hammond, floated the prospect of the U.K. as Singapore-on-Thames, a low-tax and low-regulation haven that would thrive by attracting international business. The U.K., such supporters said, would strike its own, more advantageous trade agreements with the U.S. and other countries.

How much of that happened?

Not much. Yes, the British no longer are bound by EU legislation.

But the Brexit deal that Johnson reluctantly backed tied British regulatory policy closely to that of Europe (because otherwise the EU wouldn't buy British goods) and generated costly red tape. In one of the U.K.'s four constituent countries, Northern Ireland, EU law still largely reigns, because the EU refused to jeopardize Irish peace by erecting a hard border across the island of Ireland. Instead, there is a customs border between Northern Ireland and the rest of Britain, a rift that infuriates many Northern Irish.

And because Johnson keeps trying to rewrite that provision of the Brexit agreement, the U.S. -- which had taken the lead in writing the Irish peace accords -- has refused to sign a major trade agreement with the U.K.

How is Britain's economy?

It's not in good shape. Immediately after the referendum, the pound fell 10 percent, and it has not recovered. That pushed up prices of imports and delivered what the Center for Economic Policy Research called "a swift negative shock to U.K. living standards." Things deteriorated further when the U.K. actually left the European single market in December 2020, during the height of the coronavirus pandemic.

The flow of goods snarled because of the loss of European truck drivers, and manufacturing took a hit because firms were shut out of EU supply chains. Just a decade ago, the average Briton was about as wealthy as the average German; now that Brit is 15 percent poorer than the German. Brexit Minister Jacob Rees-Mogg was ridiculed recently when, asked to name the economic benefits of Brexit, he resorted to touting the avoidance of a 2 percent hike in the price of fish sticks.

Surely there were other pluses?

Britain has indeed taken back control of its immigration policy, and it no longer pays dues to the EU.

Some argue that immigration is now fairer, since EU members are no longer automatically favored -- although immigration rates have remained steady, rather than dropping as promised. The U.K. has also adopted stronger polices than the EU on animal welfare, an issue dear to British hearts, and has banned the export of live farm animals. More generally, Brexit has had a significant psychological effect, restoring a sense of proud independence to a nation that never quite got over losing its empire.

Still, that renewal of English patriotism has a dark side: The Brexit campaign demonized immigrants, and hate crimes have more than doubled since 2015. In a recent poll, just 17 percent of Brits said Brexit had made their lives better.

How will Johnson's departure affect Brexit?

The Conservative Party's race to replace Johnson as prime minister, pitting Foreign Secretary Liz Truss against former Chancellor of the Exchequer Rishi Sunak, has taken shape as an ideological battle over Britain's post-EU future. It's become Tory orthodoxy to express no regret over Brexit, and Truss, the favorite, took some flak for having voted Remain.

But she now supports the Singapore-on-Thames option, saying she would slash regulation. Sunak, by contrast, would spend on social services and raise taxes on corporations. Meanwhile, -the opposition Labour Party under Keir Starmer has adopted the new slogan "Make Brexit Work," vowing that if it took power it would make the most of what it calls a "poor deal." Other key Labour figures, though, including London Mayor Sadiq Khan, want the U.K. to rejoin the European single market.

Brexit, Khan said, is "the biggest piece of self-inflicted harm ever done to a country."

Brexit has weakened the bonds among the U.K.'s four countries: England, Scotland, Wales, and Northern Ireland. The new customs border between Northern Ireland and the rest of the U.K. is a symbolic break between Belfast and London, and there's now talk among Northern Irish nationalists of holding a long-shot referendum on leaving the U.K. to unify with Ireland. Scotland is even more likely to hold an -independence vote.

Most Scots, 62 percent, voted to remain in the EU, and many want to rejoin. While Scottish voters rejected independence in 2014, in a poll last year more than half said they wanted another referendum. Scotland's First Minister Nicola Sturgeon is currently battling in court to give them one. "Scottish democracy," she said, "will not be a prisoner."

This article was first published in the latest issue of The Week magazine.

If you want to read more like it, you can try six risk-free issues of the magazine here