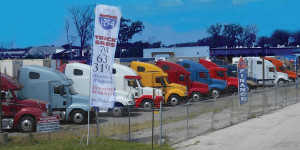 Preliminary used Class 8 retail volumes (same dealer sales) rose 6% month-over-month, but were 39% lower compared to June of 2021, according to the latest preliminary release of the State of the Industry: U.S. Classes 3-8 Used Trucks published by ACT Research. Click Here to Read More

Advertisement Other data released in ACT's preliminary report included month-over-month comparisons for June 2022, which showed that average retail price and average miles both contracted, at -6% and -1%, respectively, while average age was 3% higher m/m. Compared to June of 2021, the average retail price was 50% higher, with average miles and age greater by 1% and 12%, respectively.

ACT's Classes 3-8 Used Truck Report provides data on the average selling price, miles, and age based on a sample of industry data. In addition, the report provides the average selling price for top-selling Class 8 models for each of the major truck OEMs - Freightliner (Daimler); Kenworth and Peterbilt (Paccar); International (Navistar); and Volvo and Mack (Volvo). This report is utilized by those throughout the industry, including commercial vehicle dealers to gain a better understanding of the used truck market, especially as it relates to changes in near-term performance. Advertisement

According to Steve Tam, vice president at ACT Research, "Thankfully, fuel prices have begun showing signs of abating. However, inflation remains entrenched, with many economists expecting it to remain elevated for quite some time." He elaborated, "While the spot freight market started slowing early in the year, contract freight has held reasonably steady. However, contract rates are starting to show signs of near-term softening.

To be clear, they remain significantly higher than they were at this time last year." Tam continued, "But looking ahead, the slowing market is inevitable. Closely paralleling that are values in the used Class 8 commercial truck market.

Volumes are a different story." He concluded, " US used truck pricing moved sooner and to a greater degree in the auction and wholesale markets, giving those who live in the retail world a sneak peek as to where their market might be heading."