ETRC: Slovakia Ring returns as round three is go 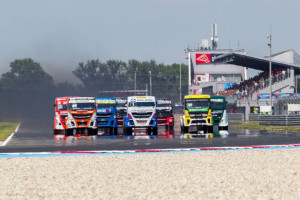 The current leader in the standings, Norbert Kiss has scored five victories out of seven race starts so far and, with 101 points to his name, he positioned himself well en route to his fourth FIA ETRC crown. The Hungarian's closest rivals, Sascha Lenz and Jochen Hahn, will be looking to stay within the striking distance of the reigning champion and to keep their title chances alive in Slovakia. The leading trio has so far been in a class of their own, sharing the podium on three occasions this season.

Lenz is currently 18 points down on Kiss, with Hahn trailing his compatriot by a further five points. Last time out at the Hungaroring, 2017 title winner Adam Lacko took his first victory of 2022. In what is his "almost" home race, the Czech racer will aim to maintain the momentum and collect further silverware.

Spaniard Antonio Albacete was victorious at the Slovakia Ring back in 2019 and, having experienced a weekend of mixed fortunes in Hungary, will be keen on getting back into the mix with the leaders. Steffi Halm is yet to finish on the podium this year, but the German driver won at the Slovakian venue in the past and will be looking to get her first top-three finish of the season. With a podium finish under his belt at the Hungaroring, Andre Kursim has put himself in the mix with the front-runners and will do his best to remain in touch with the championship-leading pack.

The Goodyear FIA ETRC grid will be bolstered this weekend by the return of Portuguese racer Jose Rodrigues, who took part in the season-opening event at Misano and was absent in Hungary, and Spaniard Luis Recuenco, who is set for his first appearance of the season.

All the races will be streamed on Goodyear FIA ETRC's official channels.