“Nonunion drivers are getting paid better than us:” Car haul truckers in US determined to strike Tuesday night

Are you a car haul worker? Tell us what you think the most important issues in your struggle are. The national contract for the Teamsters car haul division is set to expire Tuesday at midnight. In 2021, the Teamsters union signed a one-year extension to the five-year National Master Automobile Transporters Agreement that included an insulting 1.8 percent wage increase. 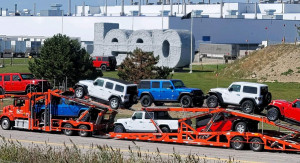 Nearly 5,000 truckers and yard employees, who transport and load and unload new vehicles from assembly plants to rail heads and car dealerships, are determined to recoup their losses and win substantial improvements in wages and working conditions.

Earlier this month, drivers and other terminal workers in Detroit, Toledo, Ohio, western New York and other locations cast unanimous or near-unanimous votes to authorize strike action. For years, the Teamsters union has accepted wage and benefit concessions, claiming this would allow unionized carriers to "compete" with nonunion companies and supposedly "save union jobs." But the concessions have not saved a single job. There are about half as many unionized car haulers today as there were at the time of the last walkout in 1995, when 12,000 truckers struck the then-largest US car hauler, Ryder System, Inc., for over a month.

Due to the demand for drivers, workers at the nonunion trucking companies earn more than the £26 an hour unionized workers make, according to drivers who spoke to the World Socialist Web Site. The national contract covers employees at Missouri-based Jack Cooper Transport, Illinois-based Cassens Transport and five other smaller carriers. During the last contract fight in 2017, rank-and-file workers voted down two Teamsters-backed concessionary contracts before the union rammed through a third deal.

At the time, Teamsters car haul negotiator Kevin Moore said the pro-company deal "will give the unionized side of auto and truck transporters a chance to grow in the future." By 2019, however, Cooper, which was founded as a carrier for GM in 1928, turned to the bankruptcy courts to further slash labor costs and pensions. Far from opposing this, the Teamsters, with the backing of the phony dissident group, Teamsters for a Democratic Union (TDU), threatened workers, saying, "If this is rejected, this will likely result in the business being shut down and its assets liquidated."

Negotiations between the carriers and the Teamsters union, which began in April, are reportedly continuing in Romulus, Michigan. But workers have been kept in the dark about the companies' demands and the union's counterdemands, even though the expiration is only days away. With the auto industry and the carriers making large profits, workers are determined to win large pay increases and protect their families from raging inflation.

"Nonunion drivers are getting paid better than us"

Drivers at a Cassens terminal on the east side of Detroit who spoke to the WSWS explained the issues in their battle. "With the way inflation is, what's 1.8 percent?" a veteran driver said, referring to the raise the Teamsters agreed to in the one-year contract extension last year. "With an 8.3 percent inflation rate, we're going backwards, and there are tons of other trucking companies that are out there hiring at higher wages than we are making. I'm just not bumping a dock.

This is specialized freight where you couldn't grab any truck driver and tell them to go load this and drive this truck. They wouldn't have any idea." The driver continued: "We will not stand for a two-tier wage system.

Absolutely not. They tried to do that two contracts ago and we turned it down. Right now, we all make the same thing, and if you started tomorrow, you would make the same amount of money as I do.

If they throw that two-tier at us, it will get turned down again." Another veteran driver summed up the basic needs of workers. "Pay, pay and pay. There's no reason for us to be union and be laughed at.

We had a lot of guys leave because it's better pay everywhere else. But there are perks to the union and that's why I'm still here; the union is a family, but we got to get this pay right. "All of the other drivers who are nonunion are getting paid better." Referring to the so-called Teamsters reformers in charge of the union, including new president Sean O'Brien, he said: "We are not elevating the appropriate people.

When we put them in places of power, they forget where they came from and the job that they are supposed to be doing there. The people have to know what they are standing for, see the bigger picture, and stay committed to that picture." Railroads currently transport 75 percent of new vehicles in the United States and have innovated with new larger tri-level rail cars 85 feet long with a capacity of 12 to 20 vehicles and hundreds of vehicles per train to reclaim shipping business from automakers.

Jack Cooper and Cassens currently transport tens of thousands of new vehicles every day. The specialized and more expensive equipment for the heavy-duty tractor trailer combination can haul eight to 11 vehicles at a time. Facing high diesel fuel costs, the companies are determined to protect their profits and investors.

At the same time, carriers hope to offset higher diesel fuel prices through more cuts to wages and benefits. The impact of a strike on the auto industry The automotive industry accounts for 3.9 percent of US GDP and is expected to generate £82.9 billion in sales in 2021.

Although they are making rising profits, the automakers are constantly pressuring carriers to lower their transportation costs. A strike would immediately reverberate throughout the auto industry, parts suppliers and other industries. Some 150,000 GM, Ford and Stellantis workers face a contract expiration in September 2023 and are determined to overcome decades of givebacks pushed by the United Auto Workers union, including the hated two-tier wage system.

At the same time, tens of thousands of railroad workers also want to fight exhausting schedules, the push for one-man train crews and eroding living standards.

In their fight, the railroad workers are also battling the Teamsters Rail Conference, which is composed of the Brotherhood of Maintenance of Way Employees Division (BMWED) and the Brotherhood of Locomotive Engineers and Trainmen (BLET). The union has dragged out contract negotiations for 105,000 workers at BNSF, Union Pacific and other Class I railroad companies for more than two years. When a federal judge in Texas issued a strikebreaking injunction against a strike by 15,000 BNSF workers against a new punitive absentee policy--designed to push out higher-paid senior workers--the Teamsters went along with it.

Car haulers are in a powerful position to strike and to link up their struggles with autoworkers, railroad workers and 25,000 dockworkers on the West Coast ports, whose contract expires on July 1. But this means taking the struggle into their own hands by forming rank-and-file committees, independent of the Teamsters union and all of its factions, including the TDU. Whatever his rhetoric, O'Brien, long a trusted Hoffa lieutenant, will be no different from his predecessor.

This has already been shown in the railroad negotiations, the sellout of the Seattle concrete mixer drivers and the miserable 2 percent annual raises proposed by the union for 1,200 sanitation workers at Republic Services in Las Vegas. Build rank-and-file committees The separate struggles of transport industry workers must be united and guided by a single strategy to fight for what workers need, not what the trucking bosses and corrupt union officials say is affordable.

This includes 20 percent annual wages, full cost-of-living protections, fully employer-paid health care and pension benefits, workers' control over health and safety, including protections against COVID-19, and the hiring of thousands of workers to end exhausting and dangerous work schedules. To fight for this, new organizations of struggle, democratically controlled by the rank and file, must be built in every terminal. These committees must demand the immediate halt to backroom negotiations, the livestreaming of all talks and the upholding of the principle of "no contract, no work" by demanding strike action when the contract expires Wednesday morning.

The formation of these committees will create the best conditions for linking up the fight of car haul workers with railroad, auto, port and other workers to prepare joint action to defend jobs and living standards.

Sign up to our Autoworker Newsletter.Related TopicsFind out more about these topics: