Help from Bournemouth to Ukraine reopens warehouse in Castlepoint 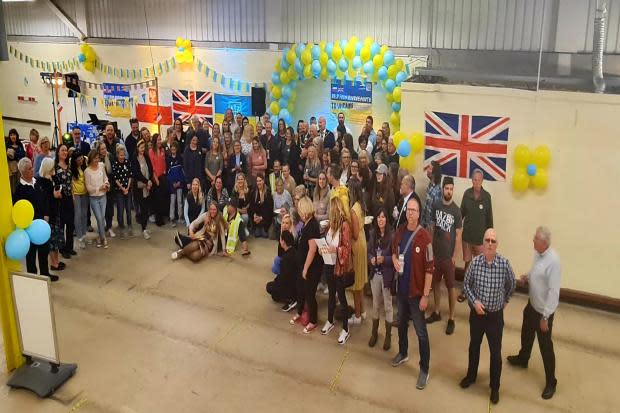 THE Help from Bournemouth to Ukraine project has reopened its ‘Army of Hope’ main donation point in Castlepoint for at least “another few weeks”.

Donations to the team’s main site had temporarily paused but now its organiser Karol Swiacki is happy to confirm the warehouse has reopened and he is accepting more donations. The project, which was started in February when Russia first invaded Ukraine, has been going from strength to strength and is receiving huge amounts of donations. Since reopening at Castlepoint on Tuesday, April 26, Help from Bournemouth to Ukraine has received a further 30 pallets of donations, including one GBP10,000 donation.

Karol said: “We have had so much support from everybody and we wanted to continue at Castlepoint. “So many people needed help. What we have done in two months is fantastic, we are not stopping and we are getting bigger and stronger, especially since Castlepoint Shopping Park came back with this opportunity.”

Karol has been working so hard, he said he did not have a day off during the first 60 days. “You don’t feel it, I’ve never felt like this in all my life,” he added. “I am so proud of what has been achieved and to be part of something so amazing.

I couldn’t have imagined what the project would have turned into when we first started. “It’s amazing. The feeling that we are supporting families in Ukraine is amazing, and the fact that we are not only supporting refugees but also the army on the front line.

Warehouse at Castlepoint used by Help from Bournemouth to Ukraine.

“We don’t have too much time to think about what we are doing. Everybody working together gives me never-ending energy.” Co-worker Daniel Murphy echoed Karol’s delight, adding: “It’s amazing to see what is being done here at Castlepoint and what help this is having on the people of Ukraine.”

The group has also seen support from haulage and warehousing company Wyvern Cargo, ferry operator Stena Line and even had travel company TUI discuss the possibility of an aeroplane being provided to make deliveries.