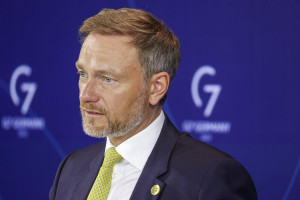 (Bloomberg) -- German Finance Minister Christian Lindner sees no need to suspend euro-zone deficit rules in 2023, saying that despite Russia's invasion of Ukraine, the economic fallout isn't a reason for a further exemption. Most Read from Bloomberg "Germany will seek a data-based decision", Lindner told reporters after a meting of Group of Seven finance chief near Bonn.

So far, figures don't support such a move, he said. The European Commission will on Monday propose extending a suspension of the budget rules -- enshrined in the bloc's Stability and Growth Pact -- until the end of 2023, people familiar with the matter told Bloomberg earlier this week. Under the rules, which had been set aside until the end of this year due to the coronavirus crisis, national deficits are limited to 3% of gross domestic product and public debt to 60% of output.

The war at the euro-area border and sanctions imposed on Russia in response have darkened the outlook for the global economy by sending energy prices surging and straining supply chains that were already reeling from the pandemic. The euro area is among the worst-hit regions because of its reliance on Russian energy and proximity to the conflict. For the long-term reconstruction of Ukraine, the EU executive is also seeking debt-financed funding similar to its 750 billion-euro pandemic recovery fund.

To help Ukraine rebuild, Germany is open to talks on granting financial guarantees to attract funding, Lindner said, while he rejected the pandemic-debt based funding model.