The drivers say no to the restrictions. The fourth day is blocked by the Canadian capital 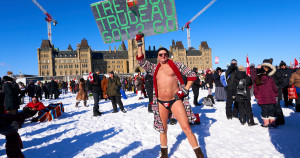 Schools, restaurants and shops are closed in Ottawa. State administration employees were called to stay at home and asked to work remotely.

Ottawa residents lend support to protesters. Canadian flags were displayed on most homes in support of drivers. Many of them found shelter in private apartments where they could sleep through an extremely frosty night, wash their clothes and eat a warm dinner.

Hundreds of residents of the capital take part in the "Adopt a driver" campaign.

Police officers avoid issuing tickets and towing vehicles in order not to confront the demonstrators. An additional 30,000 people came to the city. officers from other regions of Canada. So far, there have been no incidents.

Freedom Convoy 2022, which initially called for the lifting of compulsory vaccinations for drivers and government restrictions related to Covid-19turned into movement a protest on a scale unprecedented so far in Canada.

The organizers, in addition to lifting the restrictions, demand the resignation of Canadian Prime Minister Justin Trudeau.

Prime Minister Trudeau at a press conference broadcast from an unknown location where security had taken him and his family after truck drivers surrounded his home in Ottawa, he condemned the protesters, calling them "gross." He announced that his government would "not bow" to "racists." He added that he had decided not to approach the protesters because they used " hate rhetoric, violence and disrespect ". As a result of this speech, outraged protesters are now demanding the resignation of the prime minister.

The federal government has imposed vaccination against Covid-19 on Canadian cross-border truck drivers. It requires those who are not vaccinated to be quarantined upon return to Canada.

The protest spreads to other provinces in Canada. The border crossing from Coutts, Alberta to Sweetgrass, Montana, USA is impassable. This is where the trade route between Canada and the United States runs.

The protesters had raised more than £ 9 million by Tuesday. on GoFundMe from over 120 thousand private donors.

The money is to be used for fuel, accommodation and food for striking drivers, but also, as the organizers of the action assured, to help drivers who lost their jobs as a result of the pandemic restrictions introduced on January 15.