A moving poem written by a Victorian police officer on the night four colleagues lost their lives on duty has been recited during an emotional ceremony commemorating their service to the community.

The officers were standing in the emergency lane of Melbourne's Eastern Freeway, in Kew, about to impound a Porsche 911, when they were hit by a truck and killed on April 22, 2020.

More than 1500 people gathered at Docklands stadium to honour the four officers on Thursday, after the memorial was delayed 22 months due to ongoing Covid-19 restrictions. 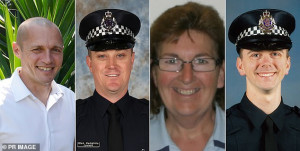 Victorian Police Minister Lisa Neville said the four fallen officers 'paid the ultimate price while keeping us safe' before reading out a poem penned by a member of the force.

'It's not about the badge or the uniform we wear; We do it for you and because we care,' the poem began.

'We leave our families to protect your home and you; And we do it because we care about what we do.'

The script then described how officers serve aware of the risks, but are 'not made of steel' and subject to pain like all humans.

While police officers have 'seen many things' others would not want to, the author said members of the force have now 'seen it all' and 'felt such grief' after losing their four co-workers and friends. 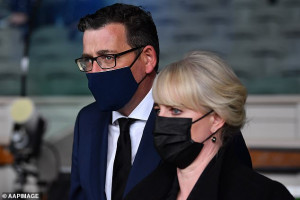 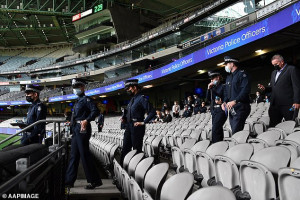 'Tonight we cry at the loss of family and friends; And the tears will never dry and our thoughts will never end,

'You live in our hearts and in our thoughts in every way.

'Of the risks that you took and the price that you paid.'

Many police officers were visibly upset through out the service, wiping tears away from their eyes as their gaze remained glued to the stage.

The ceremony began with the police pipe band welcoming a guard of honour of officers marching, while holding large framed photos of the four officers. 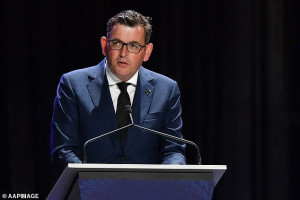 Mr Andrews opened the ceremony, acknowledging the group as 'amazing Victorians' who put their lives on the line to protect other 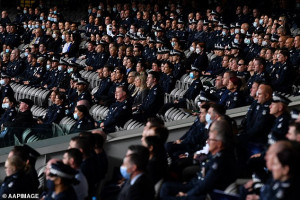 More than 1500 mourners were in attendance, including 1000 Victorian police officers and 500 members of the public 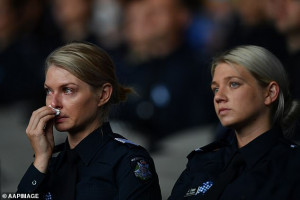 'It's not about the badge or the uniform we wear,

We do it for you and because we care,

We leave our families to protect your home and you,

And we do it because we care about what we do,

We do it to serve and protect you as best we can,

We do it even though we know what the risks are at hand,

Our uniforms aren't strong and they're not made of steel,

Nor are our emotions of how we can feel,

We are human, we feel pain just like you do,

We see so many things you wouldn't want to,

But tonight we've seen it all and felt such grief,

Of losing four lives in circumstances that beggar belief,

Tragically taken while they protected us all,

The tears are now flowing and our hearts are aching,

For the loss we are feeling and our hearts are breaking,

Tonight we cry at the loss of family and friends,

You live in our hearts and in our thoughts in every way,

Of the risks that you took and the price that you paid.'

Mr Andrews opened the service, acknowledging the group as 'amazing Victorians' who put their lives on the line to protect others.

'I doubt any of us will forget where we were and what we were doing when news filtered though that four officers - partners, parents, sons, daughters and siblings - had been killed in a terrible incident on the Eastern Freeway,' he told mourners.

'It affected all of us, it broke all of our hearts and it served as a reminder of how dangerous policing is.

'We honour their service. We grieve their loss. We commmit to never forget them, their values and the amazing Victorians they were.

'To run towards the danger.

To put your safety on the line ... is a special thing.

'No words can properly describe our gratitude ... because the tragedy of that day hangs over each family. Today and all days, we remember and we say thank you.

The premier then paid tribute to each officer and spoke of the families they left behind, urging Australians 'let us never forget' them all.

'Lest us never forget Lynette Taylor, a member of the force for three decades who'd seen just about every police station across the state. She was a devoted mum to her two sons Nathan and Alexander.

She loved her husband Stuart and together they travelled and saw so much of the world. 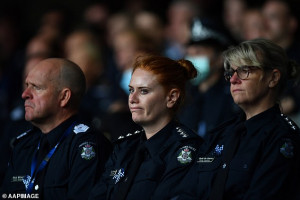 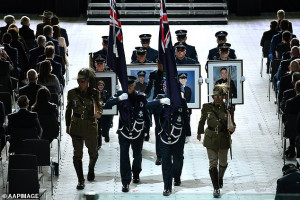 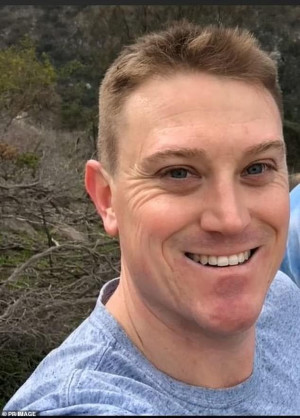 'Kevin King, who loved his family, the Tigers and his guitar. He adored his wife Sharon and their three sons James, William and Harry. He lived a life for others and was perhaps always destined to wear the Victoria Police uniform.

'Glen Humphris, who packed up his life and moved states to find his calling at Victoria Police.

He loved his mum Katie, his dad Mark and his brother Wade. Always on the go and always full of life, Glen loved his partner Todd more than anything in the world.

'And let us never forget Josh Prestney, who loved his mum Belinda and his dad Andrew and his partner Stacey. He loved his brother Alex too, who will cherish the memory of awarding his brother with his police badge on the day of his graduation.

'We honour them as great Victorians.

On this day, we thank every family that makes the extraordinary work, service and sacrifice of Victoria Police possible.'

Victoria Police Chief Commissioner Shane Patten said it had been 653 days since the tragedy but 'not a day goes by where they're not in our thoughts'. 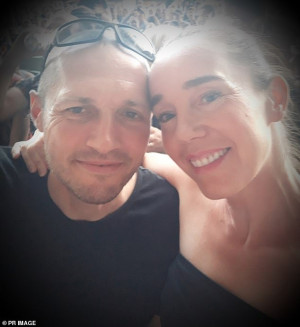 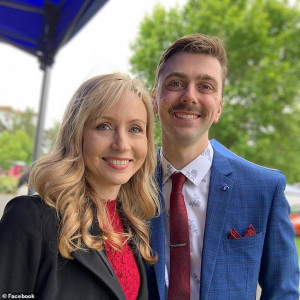 'Throughout these very dark days, the family of our fallen colleagues have shown courage, dignity, strength and resilience, in the face of what is already a heartbreaking experience and with the challenges of not being able to mourn collectively due to the COVID-19 restrictions,' he said.

The police chaplain who broke the news to Sen Const King's family on the day he died read out family tributes, including from his widow who described him as her 'soulmate'.

'We miss his smile, his laughter, his sense of humour and most of all his way of making things better,' Senior Police Chaplain Drew Mellor said, reading the tribute.

'Nearly two years on we still have the long, heartbreaking journey of life without Kevin.'

'To live that life, to run toward the danger, to put your safety on the line to protect others is a special thing.

No words can properly describe its value or worth.'

About 1000 Victoria Police officers and 500 members of the public attended the memorial.

Funerals for the officers were restricted due to Victoria's first lockdown.