An abandoned warehouse in Errill Retail Park in Plympton has been 'blown through' by severe winds brought to Plymouth by Storm Eunice. Formerly an Allied Carpets warehouse within the retail park, the abandoned warehouse has been sat dormant for some years now, but today gale-force winds during Storm Eunice have blown through the warehouse, exposing the inside. Photographs show the unit with a large metal panel missing, with others looking loosely attached - as well as a fallen tree laid in the old car park.

: Storm Eunice in Plymouth - latest updates, traffic and damage[1] This abandoned site is likely to be dangerous for the public during Storm Eunice, and there has been multiple warnings from the authorities, as well as the Met Office, to avoid heading out unless absolutely necessary. As Storm Eunice approached Plymouth on Thursday, the Met Office said: "There is a good chance that flying debris could result in a danger to life.

"Damage to buildings and homes is likely, with roofs blown off and power lines brought down. "Roads, bridges and railway lines are likely to close, with delays and cancellations to bus, train, ferry services and flights. "There is a good chance that power cuts, possibly prolonged, could occur and possibly affect other services, such as mobile phone coverage.

"Large waves are likely and beach material is likely to be thrown onto sea fronts, coastal roads and properties. "It is likely there will be falling branches and some uprooted trees." 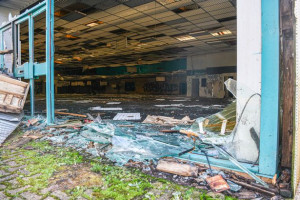 It comes as Storm Eunice blasts through Plymouth, leaving a trail of destruction in its wake. Plymouth has been under an amber weather warning from 5am as Storm Eunice moves into the South West, bombarding the city with high winds.

So far today, cars have been crushed[2], trees blown over[3], travel services disrupted[4], signs have fallen from shop fronts, and now an eerie abandoned warehouse has been exposed by the unforgiving Storm Eunice. Millions of people have been urged to stay at home for the day due to safety fears over the impact of Eunice, one of the worst storms to hit the UK in a generation. Tens of thousands of homes have been left without power, while flights, trains and ferry services have been suspended, and roads, schools and businesses have shut as potentially record-breaking gusts of more than 120mph have been recorded in the most exposed areas in the UK.

Even though the first of the Met Office's two ultra rare "red" weather warnings expired at midday affecting the south west of England and south Wales, a second remains in place until 3pm across the East of England and London due to the combination of high tides, strong winds and storm surge. Official guidance issued by the Met Office states people should "stay indoors as much as possible" and "if you do go out, try not to walk or shelter close to buildings and trees". 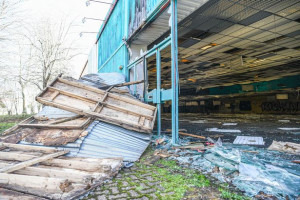 They also advise the following:

And after the storm people are advised not to touch any electrical/telephone cables that have been blown down or are still hanging. Also, do not walk too close to walls, buildings and trees as they could have been weakened and make sure that any vulnerable neighbours or relatives are safe and help them make arrangements for any repairs.

Get the best stories about the things you love most curated by us and delivered to your inbox every day.

Choose what you love here[5]