Zoagies food truck, popular throughout the East Coast, is coming to Burlington County

Burlington County, are you ready to get your Z's on? Zoagies food truck, which has gone viral with deep-fried seafood cheesesteaks and hoagies such as the Zochness Monster of the Zea, Zodzilla and Triple Zea Monster, is coming to Mount Laurel, hopefully by the first week of February, according to owner and creator Ezell Barnes, also known as Chef Zoagie. The "zenu", and Barnes' effervescent, outgoing personality, have drawn people from Atlanta, New York, Connecticut, Virginia and more to the food truck, which had been parked regularly in Pennsville, but in more recent months has been on Pulaski Highway in Bear, Delaware.

"I'm coming there (Burlington County) next week," said Barnes, who says they put the 'Z' on everything. 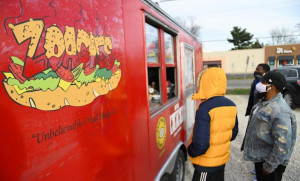 Customers line up outside of the Zoagies food truck in Pennsville in this Courier Post file photo.

Zoagies food truck is coming to Mount Laurel in February and will be parked at Lakou Events most days.

Chef Zoagie said his goal is to be in Mount Laurel seven days a week, but initially it will likely be Thursday to Sunday. He also plans to put a second truck in New Castle, Delaware, beginning Feb. 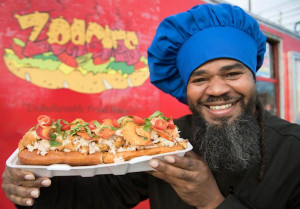 Ezell Barnes, owner and creator of the Zoagies food truck, displays a Zochness Monster of the Zea, which is a xtra-large deep-fried hoagie roll filled with fish, shrimp, crab, and lobster.

Barnes is bringing his food to Burlington County via a partnership with a Mt. Laurel event space.

Barnes made an agreement with Lakou Events owner Elie Pean, along with Lakou catering partner Cesily Cannon. Lakou Events, located at 2901 Marne Highway, is an events space as well as a commercial kitchen and is in the Rancocas Woods Village of Shops area, near Ma & Pa's Tex-Mex BBQ, a popular Mexican restaurant in the area.

The colorful Barnes added a new Zonster Truck in April to his fleet so Zoagies can literally be in two places at one time now. Barnes met Pean and Cannon about a year ago when they came to Zoagies as customers, he says. "They were courting me to come to their new spot, Lakou, and they thought it would be awesome," Barnes recalled. Story continues

Earlier: Zoagies food truck, zealous owner make comeback after drive-by-shooting hurts business "I had the one trailer operating then [in Pennsville]. We're like a tourist attraction.

People travel from all over to come to us, so I didn't want to pick up and go, so I stayed put but as I was thinking of new spots to go ... I figured Philadelphia, Trenton, Cherry Hill, all that area has always been coming to Zoagies but they always said, 'Can you please come near us.?' " Barnes briefly thought about going to the Gloucester Premium Outlets on Route 42 because he figured that would be centrally located but his mind kept coming back to Lakou, which he felt aligned more with his own vision.

"I remembered they were a new business, had a vision they were trying to provide -- an atmosphere, a vibe where people could come and relax and have good food and a good time," he added. "I said that matches my future vision of Zoagie Land. We're looking for some land ourselves throughout this year to see if we can grab and we'll establish that somewhere."

'A space for the community' 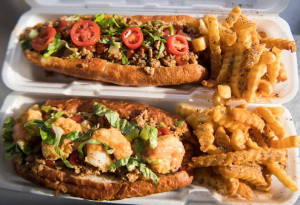 Pean, a 2003 Willingboro High School graduate, said he's happy to welcome Zoagies into the fold and is hoping to have more food trucks join them as well. He called Chef Zoagie a "great guy."

"Mount Laurel is setting up the Rancocas Woods area as kind of their main street," said Pean, who has a military background and also worked as a government contractor overseas. "They just signed a new redevelopment plan for the area,'' he explained. "My property anchors that redevelopment. The plan is to have Chef Zoagie, a couple of other food trucks here daily, have festivals and events periodically with a few more food trucks ...

Our kitchen is a commercial shared kitchen, so we have other food services that rent out space in the kitchen. 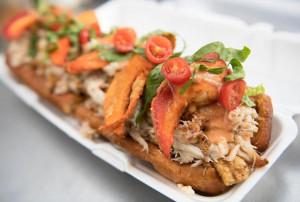 A freshly made Zochness Monster of the Zea, which is a xtra-large deep-fried hoagie roll filled with fish, shrimp, crab, and lobster, is displayed in the Zoagies food truck in Pennsville in this Courier Post file photo.

"Lakou, our purpose here is to create a space for the community,'' he continued. "Our three tenets are that we want to bring people together, empower small businesses and invest in the community. The primary motivation of starting the space, while the pandemic was going on and everybody's in this fish bowl, we're seeing the racial tensions, the economic downturn, there was so much divisiveness, I felt like we needed a space and something to bring us together." Local: Haitians, who have a strong presence in New Jersey, want to help their people back home

Lakou is a Haitian term that means backyard or courtyard, Pean explained, so this will be a positive gathering place where people can come and enjoy. "We're a Haitian family," Pean said. "Back in Haiti, when they won their independence, they developed the country and built up around the Lakou System, where families and businesses would operate around a shared courtyard, called a Lakou. The concept there was to protect against and defend against the return of the plantation system and also to support each other and build each other up."

While Barnes had been parked in Pennsville and was comfortable there for some years, he said the whole time he's had the business, the customer base was not Salem County. 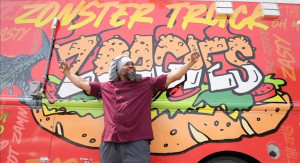 Chef Ezell Barnes, also known as Chef Zoagie, stands in front of his new Zonster Truck in April. Barnes his bringing his Zoagies food truck to Mount Laurel, to the Lakou Events space on Marne Highway.

"I've been searching for a spot where I can get 100-plus orders in a day, consistently, for a year plus, and the majority of those customers, 60% or more, be from the area that I'm in," Barnes explained. "It's always been the opposite.

I have 80% tourists. I've had a business that has survived these years completely off of marketing through the East Coast and drawing people from Pittsburgh, Virginia, New York and Connecticut to Zoagies on a daily basis. My hometown, my home county, they make up very few numbers."

Barnes started off by cooking on a fryer in the backyard of his home in Salem, then later riding his bike to deliver food up and down streets of the city until the wee hours of the morning. He graduated to the parking lot of a local Sunoco gas station in Pennsville, then moved across the street for a while. Food: RCBC culinary grad is executive chef at Valenzano Winery's Bari Wine Pub

Zoagies come on a fried roll with grape tomatoes, lettuce, cheese, a special house "zauce" and fries. The Triple Zea Monster includes shrimp, crab and lobster. He's got grilled sandwiches, too, and shrimp, fish and plenty of options and is open year-round.

There are fried Oreos for dessert. "I started this business in the backyard with a Walmart fryer, no money, no credit and £70 worth of fresh fish from Philadelphia," Barnes said previously. "From there, riding my bike up and down what they call Crewshaw delivering Zoagies every night." Barnes said his second space, in New Castle, will be at 1401 North Dupont Highway, near a major shopping district, he says, near a cigarette outlet.

"It was known for a big food bus that was there for years and years (Kabob on Wheels)," he shared. "They moved on. I saw that spot and saw it had electric built in. I don't have to worry about generators and all that.

I said I should go ahead and make that happen." Zee you soon, Zoagies. Celeste E.

Whittaker is a features reporter for the Courier Post, Daily Journal and Burlington County Times. The South Jersey native started at the CP in 1998 and has covered the Philadelphia 76ers, college and high school sports and has won numerous awards for her work. Reach her at 856.486.2437 or [email protected].